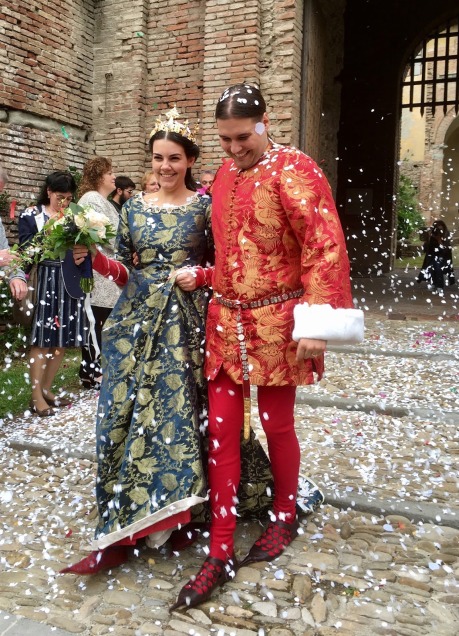 It all started year ago in Visby, Gotland. My young italian friends Anna and Francesco lived with us in Battle of Wisby camp. One day we were again taking a walk to the old town, and they asked me to take their photo at their favorite spot.
I did. They looked happy and very much in love so I sait that “you can use this at your wedding invitations”.
You see, ten years ago me and Riku were in Visby and we got our picture taken – and year later we used that picture in our wedding invitations.
This young couple looked at each others and started to giggle. “Psstt.. this is a secret and you are first to know… we are getting married, next year”.

Later that week they came to me. They had a question about their wedding.
“Would you make our dresses”, they asked.
“Of course I would, it is an honour”, I replied.
Medieval dresses yes. I forgot to ask “what kind of a dresses”.

This is what they asked me to to: they are from same manuscript, but from two different pictures.For the wedding they made this picture with little help of photoshop.

Long train and confetti, the thing they throw at wedding, is a lovely combination…

So the one year long project started.

During the winter we talked about the model, layers, details and most important: the gold fabric. I followed the project from aside, like “yes, that pattern would be awesome”.
Then this spring I got message: “fabrics are almost ready”.
It was time time to make first fitting.

How to deal when distance between client and seamstress is as far as Italy-Finland? We travel.
For first fitting Anna and Francesco came to Lahti Finland.
And this is the point where Noora comes in.

I met this talented tailor/dressmaker at Hämeenlinna medieval market few years ago. She came to my booth and we talked. She was interested in historical clothing and also medieval. I told her to come to my dress course – I had no idea I was talking to a double master in clothmaking…

This spring we sat together in Maikki Karisto´s spinning workshop and I told her that I´m going to make extraordinary dresses for a wedding in Italy.
I could see that she was more than interested so I asked if she wanted to come and help with the fitting. She is a master in pattern making so I had some selfish thoughts when I asked her to join the fitting.

Italian guests in Lahti. The lake ice was already too weak to walk.

At the end of March we finally had guest from Italy.
We could not tell anyone why Anna and Francesco visited Finland in that month,  when ice and snow were almost gone.
We did nothing else but fitting. And basting. And testing. 14 hours a day. We finished work only some hours before guests had to go back on very early flight.

Noora has a nickname “millimeter”, and it´s given for a reason. Her skills in pattern marking are superior.

Francesco´s fabric was already with them and Anna´s fabric was brought to my hands by a trustworthy delivery company few weeks later.
Same time I was working with Nesat project and then Vapriikki museum placed their big order so I was rather busy at the time…
So all the time when I was posting pictures of finished works I was also sewing these dresses.

I decided not to think too much the fact that I was working with unique material – which also cost quite a lot. “It´s only fabric”, I told to Noora, who did not dare to make first cut on gold.
So I did. Oh heavens it ruins the fabric scissors! The “just silk” dresses Noora cut with her steel carbon blade “these are only fro silk” scissors, but for metal me chose to sacrifice my scissors.
You see, cutting and sewing gold is not easy, specially sewing when there are several layers. It makes needle blunt – the needles had to be sharpened frequently.
It hurts fingers, makes them bleed, if you don’t us thimble. Wrists hurt. And it´s very slow, I noticed. 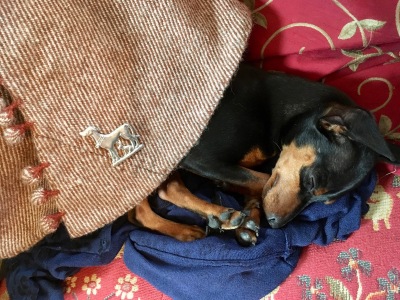 I made the clothes in my kitchen – and this little help was with me most of the time. 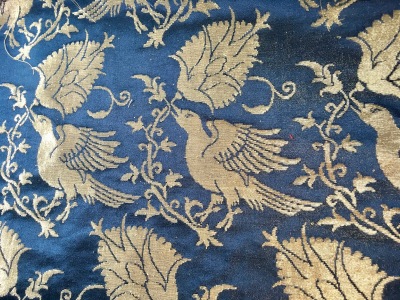 Anna´s pattern has birds and feathers. It´s based on extant piece located Uppsala cathedral, where they also have Margareta´s golden dress. 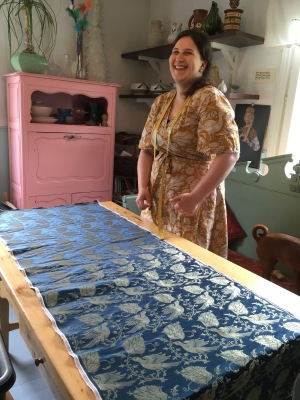 “I can´t cut this I can´t cut this…” Noora cut´s fabric every day at work,. but this was something different. That is not a cheap fabric, I can tell you.

“Naah, just give ge the scissors, it´s only fabric”, I replied. Tikru agrees.

Yes, the gold fabric was fraying a lot. So I found these golden yarn balls everywhere in our house. And I still find gold threads, even dresses left the house over a month ago.

After padding I was sewing silk with silk,

and then more silk with silk.

And then I was sewing silk+gold and super fine wool with silk.
Sewing through real gold is not easy, I can not tell. But I l learned quickly in which angle the needle goes through – and when it doesn´t.

Then it was time to do the second fitting, this time in Italy. And yes, we still could not tell what we were doing, so “for no reason me and Noora just decided to spend weekend in Italy”. We stayed in B&B close to Milan airport and fitted and fitted. Not 14 hours a day – we were in Italy so we ate too. 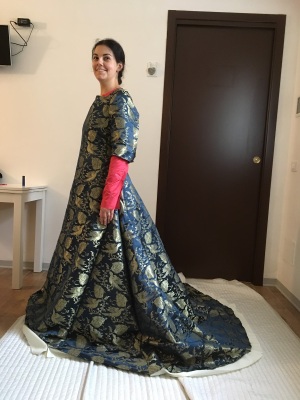 Second fitting In Italy. Anna got the fit the basted dress to see the shape. I decided to shorten dress a little bit from the front, to make it easier to move with.

The pattern on Anna´s dress is inspired by Margareta´s golden dress, the famous dress from Uppsala. We also decided to make her a proper trail. The very wide skirt part is pieced – the fabric itself is narrow. We did not cut  gores in the middle because we wanted to keep the pattern intact in the whole front piece. The back piece has a middle seam and both pink and golden layer have a side lacing.
The fabric is 63 cm wide – the dress has almost 12 meters of it.. Anna had a plan for off cuts so we could spend some extra fabric to make patterns even. 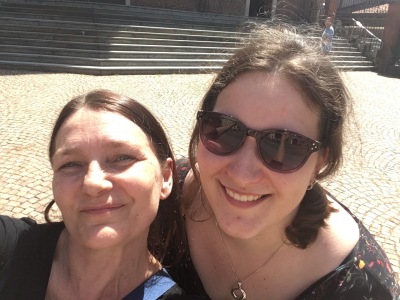 Not just work, also sun and good food in Italy. 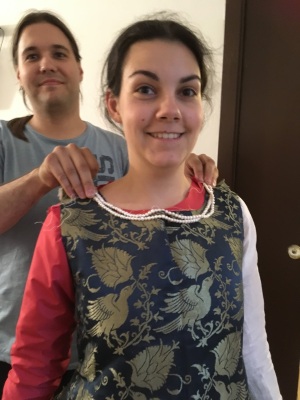 Anna finished her dress with pearls – like the original manuscript picture also has. Testing!

How about some padding..

My version of thimble: Moomin tape. Yes, the gold is hard for finger tips. I can tell that they do have my dna in one of the dresses…
Every single stitch in these six dresses are handmade. 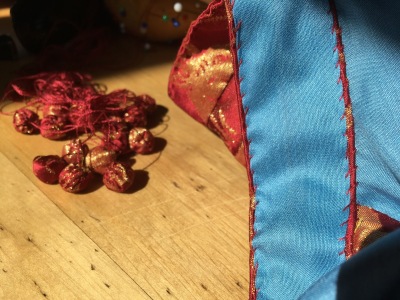 I was sitting in my kitchen and sewing – and sometimes there was sunlight, so I could just admire the shine of the silk and also gold.

I saved every piece of gold fabric and returned it to owners. They made some special gifts –  I got for example a small purse of Francesco´s fabric – and he carefully separated gold threads to make tiny golden tassels to my purse

Francesco´s clothes ready – the middle layer is very basic, a bit like Bockstenman but in silk. I made also the fur work.

Close up of Francesco´s patter – it has deer, dog and some kind of bird beast. His linins is light blue silk. 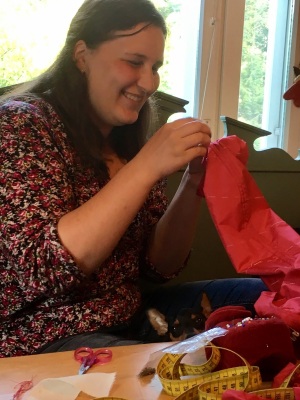 Final touch: Anna´s silk dress has tiny tiny hooks and eyes. They are made by Francesco and so small I can hardly see them (I am half blind you see, so some things I can´t do). Noora the Millimeter helped and if you look close, she also got some help…

When we travelled to fitting, all fabrics were in my hand luggage  – and when Italian airport security service wanted to see what I had in my bag I told them “NOT TO TOUCH”.
When the dresses were made, we did not even consider of putting any of these to risk by sending them by mail. So: when we met in Sweden in the beginning of August, at Carnis banquette,  I was carrying the dresses again in my red back pack as hand luggage to give them to new owners.

My work was done – Anna finished her outfit by sewing pearls to the pink silk layer sleeves and adding the gems and pearls to the golden dress neckline.
More of the patterns, materials and acccessories you can real at Anna´s blog. The golden crown and Francesco´s belt are stunning work. 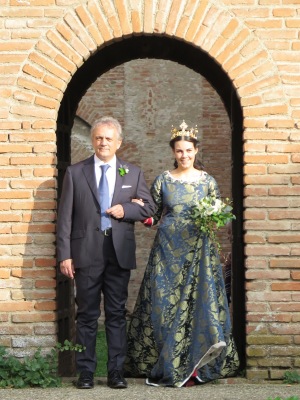 Anna and her father Walter.

I want to thank Anna and Francesco for this once in a life time experience – it was an honour.

View all posts by swanmervi